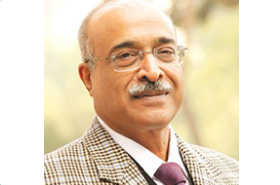 Mr. Jayant Hari Har Lal is an alumnus of the prestigious The Doon School, Dehradun and IIT, Kanpur. He started his career as a Marketing Engineer, then became an entrepreneur and eventually moved towards his passion – teaching. After 7 years of voluntary teaching at his alma mater – The Doon School, he became a full-time faculty member and went on to serve as Housemaster and Deputy Headmaster at The Doon School. He was also the Founder Principal of the Sanskaar Valley School in Bhopal. He hung up his boots as Director Development at The Doon School in 2011 and is nowadays engaged as an Education Consultant.

He has been advisor and Senior Executive Director to the Shri Ram Education Trust where he helped establish schools under the greenfield education project at Gurgaon, Rohtak, Agra, Indore, Patna, Siliguri, Dehra Dun, Bangalore, Ujjain, Khajuraho, Delhi and Tarapur. He has also been advisor to the Sehwag International School.

Mr. Lal is an Honorary Member of Round Square International which is an organisation of over 100 schools worldwide and a member of Global Connections which has senior school leaders from around the world as members. He has also been nominated to the Board of AFS India and is the co-chair of the School Member Committee of AFS India – an international organisation with a presence in 99 countries and which has its Head Quarters in USA.

He was recently invited to a leading school in Austin, Texas as a ‘visiting scholar in residence’ and was the keynote speaker at their prestigious Martin Luther King Day.

An avid reader, a keen sportsman having played competitive Basketball, Squash and Golf, he is based in Dehra Dun and travels regularly to Mumbai, Kathmandu, Siliguri, Khajuraho and Delhi on work.